Pressures will drive CROs to merge or find a niche; report

Consolidation in pharma, coupled to the trend for strategic partnerships, will lead to CRO mergers, with large companies getting bigger and small firms focusing on niche opportunities, according to a report.

Biocon and Siro Clinpharm in talks

Biotechnology firm Biocon is in talks with CRO Siro Clinpharm about a potential partnership, according to reports in the Indian media.

MDS believes its early stage business is likely to sell for less than previously expected because of the continued deterioration of market conditions and its declining customer base.

Quotient Bioresearch has secured the supply of 14C labelled compounds for its customers ahead of its move to a new purpose built facility in Cardiff through an extension of its agreement with GE Healthcare (GEHC).

Indian CRO Siro Clinpharm has renamed its European units and plans to open offices in two more countries in the region in the next few months.

Rexam will close its pill and tablet bottle making facility in New Hampshire, US by the end of the year to further align global plastics operations according to new CEO Graham Chipchase

Delays, takeover bids and Puerto Rico hurt 09, but Patheon up about 2010

US drugmaker NexMed has maintained its place on the Nasdaq Stock Exchange, partly as a result of its acquisition of US preclinical CRO Bio-Quant.

Patheon and JLL are to end the legal actions between them by entering into a litigation settlement which establishes a board of directors and limits JLL acquiring additional restricted voting shares before April 27 2012.

Few pharma plants will be sold to CMOs; report

The recent wave of M&A will lead to manufacturing over-capacity at pharma companies but only a small number of these sites will be sold to CMOs, in part because of the facilities’ suboptimal locations, according to a report.

Icon is looking to expand its bioanalytical capacity in Asia, notably in China, and bolster its genomics, proteomics and cell-based assay capabilities, according to a VP who discussed diversification of the business.

MDS’ Central Labs has been rebranded as Clearstone Central Laboratories following its acquisition by Czura Thornton, which is looking to expand the business and that of Chiltern, a CRO also owned by the investment company, into new geographies, according...

MDS Pharma Services’ Central Labs division is to be acquired by Czura Thornton, a private investment group that owns Chiltern, for approximately $8m (€5.4m) as part of the CRO’s repositioning.

We look ahead to CPhI 2009 which takes place in Madrid, Spain next week and will showcase the world’s leading ingredients, contract services, machinery and biotech companies.

CRO market will have a healthier 2010; MDS

The outsourcing “market is poised to return to healthier growth rates in 2010”, according to the president of MDS Pharma Services who also told Outsourcing-Pharma that CROs will play an increasingly important role in drug development.

Patheon overview - a look at what Lonza would gain

With Lonza and JLL competing over Patheon Outsourcing-Pharma looks at what the CMO offers to a prospective buyer, analysing its global manufacturing capacity and backlog using interactive maps and graphs.

Bristol-Myers Squibb (B-MS) has outsourced the manufacture of some of its products to Sigma Pharmaceuticals, an Australia-based company that also bought a facility from the big pharma for A$60m ($51.7m).

CRO Averion is planning to become a private company to reduce expenditure on auditor fees, which could realise savings of $805,000 (€561,000), and allow management to better focus on long-term goals.

Cloud Packaging Solutions has said the acquisition of Toll Packaging will boost its ability to meet the increased demand for shorter packing runs triggered by the current global economic crisis.

US contract services firm PharmaForm has cut its workforce to 65 employees in a restructuring plan that parent company Akela Pharma said optimises its client support infrastructure.

US investment group JLL has described Lonza’s rival offer for Patheon as “a hostile attempt to adversely impact [the Canadian contractor’s] competitive position.”

By acquiring a stake in India-based RSIPL Evotec believes it can offer clients quicker drug development services, an important aspect of coping with attrition, because larger teams of chemists are available in emerging markets.

Facing “unparalleled” challenges MDS is seeking a buyer for its Pharma Services division, and claims to have begun discussions with two interested parties, to allow it to focus on its Nordion business.

Summit has sold Dextra, its analytical and manufacturing services division, to NZP but believes operating the contract business has been beneficial to its industry standing and R&D capabilities.

The Californian budget deficit presents a “real risk to future biotech investments”, according to the CEO of BayBio who explained to how the industry now has a difficult relationship with the state.

Source BioScience (SBS) is eyeing acquisitions and investments in technology after it posted a profit in the first six months of 2009, overturning a loss in the same period of last year.

Encorium plans to liquidate if it can negotiate the sale of its Finland-based business, which could happen in the fourth quarter.

Canadian contractor Patheon has welcomed the $460m (€321m) takeover offer from Switzerland's Lonza that could, according to some observers, spark a bidding war with rival suitor, US group JLL Patheon Holdings.

Millipore has expanded its European biotech services business by acquiring BioAnaLab, a UK-based company that provides analysis of biologics and vaccines.

Phase Forward’s GAAP net income fell by 41 per cent in Q2 despite an increase in revenues, as rising operating costs hit the company.

Australian group Amcor has confirmed that talks about a takeover of Alcan’s pharmaceutical packaging business are still ongoing but says that no binding agreement has yet been reached.

Sepha shows off BlisterScan in Japan

US CROs NERI and the ProMedica Clinical Research Center have teamed up to offer comprehensive Phase I-IV trial services to the drug industry.

There has been “tremendous interest” in Fate Therapeutics’ Catalyst programme, which gives access to induced iPS cell technology as part of collaborative relationship between numerous companies.

PDI posted a larger operating loss in Q1 2009 than in the previous year, with the company blaming the decline on the expiration, termination and postponement of contracts.

Siro ClinPharm and ACT team up on oncology

Indian CRO Siro ClinPharm is teaming up with New Jersey based pharma services firm Advanced Clinical Trial Solutions (ACT) to strengthen its position in the US cancer trial sector.

Companies seeking research services in India and China will now be able to use a single contact following an alliance between GVK BIO and Excel, which the companies claim is the first to span the two nations.

The past few days have seen a string of announcements from contract research organisations (CROs) which indicate that their appetite for international expansion and development remains unsated.

US company CardioNet, which specialises in mobile cardiac monitoring devices, has made a foray into the contract research sector with a $14m offer to acquire cardiovascular research firm Biotel.

ReSearch Pharmaceutical Services has expanded its activities into the Asian market via the purchase of Chinese contract research organisation (CRO) Paramax International.

PPD buys one company, sells another

The committee set up by Patheon to review the unsolicited bid by private equity firm JLL to take control of the firm has asked for advice on the legality of the move. 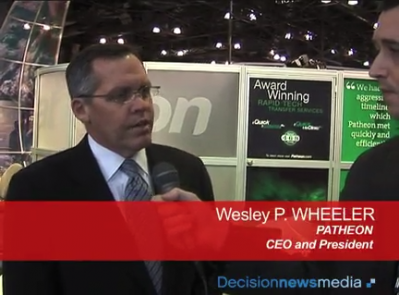 The global economic downturn, impending blockbuster patent expiries and the wave of consolidation sweeping the pharmaceutical industry will drive demand for Patheon’s restructuring service according to CEO Wesley Wheeler.